It’s Monday, and it’s hot out.

What do you do?

If you’re like me, you ooze out of bed, you amble into the shower – maybe you remember to use conditioner, maybe you don’t – you fashion your hair into something and convince yourself it looks stylish (much easier if you don’t use conditioner), you slurp down a cup of coffee, maybe snarf a couple of eggs if you had time, you try to wear matching colors and you head out the door. You sit on 694 for what feels like a day, and you sit at your desk for what feels like your morning commute.

Survive that, then what? You go home and waste your eyesight on “Washed-Up Celebrity Dance-Off?” You go to the gym and spin the tarp on a hamster treadmill?

No. If you’re like me, you head to Burger Moe’s and drown your Monday in a wash of sunlight and burger drippings.

The Basics: Burger Moe’s rests in the shadow of the XCel Energy Center in the West 7th St. pocket of St. Paul, and has been there since 2010. They have their own parking lot, and you can even find a spot in it sometimes! Of the restaurants I see on my Facebook feed, and there are plenty, only Smalley’s works harder than Moe’s on the update front.

So why are you getting caught in Moe’s orbit the next time you’re in St. Paul on a Monday? Because every burger except their super-huge is $5 on Mondays. 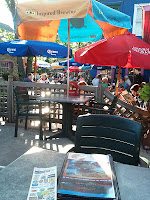 Speaking from my travels thus far, the outdoor seating at Moe’s has no rivals. Mismatched umbrellas stagger over your line of sight while light strings connect rooftops and weave through tree branches. This corridor is lined by lush greenery, and a fountain churns water clumsily into a pool in the rear. In a dining scene obsessed with elegance and/or irony, Moe’s wears its beach hat to stunning effect.

Last Monday marked my first trip of the season, a double date with Smooth, Masseur and his girlfriend (Code name: Doc, in honor of her just earning her doctorate). Get there early if you can – you can get parking in the lot on Mondays but you might have to kick your car into reverse, cut off two cars, and Austin Powers yourself into the last spot.

You learn some things driving in Minneapolis.

I grabbed a table six-person table set right before the fountain. The fountain sounds like an aquafart, but it’s peaceful (though a lot of people want to look at it, and that’s not necessarily peaceful). Among the tap roster at Moe’s is Curious Traveler, my summer go-to. An observation worth mentioning is Moe’s lets your dog hang out here in Umbrella Row. 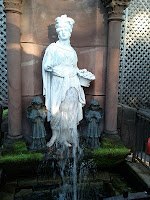 Service is always excellent at Moe’s and tonight was no exception. I wasn’t bugged when I was alone and we were well tended to when the crew was here. Masseur and I dove into the Denny Burger, a slab of cheddar-caked Angus on a sesame seed bun with bacon and a fried egg. Smooth got her usual, an Axtell Burger – a Denny minus the egg, basically. I don’t remember what Doc ordered. You can get traditional fries on the side for free but I always throw down the $2 for waffle … because I’m a BALLER, and ballers get the waffle fries.

Conversation is easy here because of the open air (parts of the restaurant wall facing Umbrella Row lifts up, making Moe’s that much more open), so I was able to feel precisely as inadequate as I needed to hearing Doc discuss her thesis defense while I tried to pretend I could imagine that feeling. Truth is, if I had to defend a thesis at that high a level, I’d do a worse job than the black knight did defending the bridge. 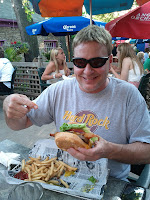 sh-day traffic didn’t slow the food’s arrival and didn’t compromise the taste. The thick-cut bacon isn’t to be trifled with, and the taste of the beef makes its way through the egg yolk and cheddar. My only complaint is that the bottom bun comes off on your fingerprint, but I suppose having four different sauces on a single food item (ketchup, yolk, grease, and chipotle aioli) might do that to you. Smooth and I hadn’t had Moe’s in probably six months, and our collective sentiment at the table was akin to that of reconnecting with an old friend.

I wouldn’t put Moe’s in a category with Vincent, or even The Nook for that matter, but the Denny and Axtell Burgers sit comfortably in the better half of this market’s competitive burger scene. Everything else about this experience is top-of-the-line: Good service, great specials, and an unexpectedly diverse beer list. You don’t walk past a place like this and expect a respectable craft stable, but they’ve got one.

Moe’s knows what it takes to bring its people to Umbrella Row, and they’re doing almost everything right. Oh, did I mention that Facebook friendship with Moe’s can sometimes land you a two-for-one Tuesday or a special discount for healthcare workers? When you’re that efficient in your efforts, what you get is a paradise packed and a burgeoning flock of followers. When the ice melts, this is where Lowertown shoots to on Mondays. There’s just no other logical choice.

So if you’re like me, you pull your car out of Burger Moe’s, you weave through walkers like a weird reverse-Frogger game, you drive home, and you take your food belly to bed. You forget how bad Monday was supposed to be.