One minute, my wife and I have our heads forward in prayer as a priest is sprinkling my new car with holy water. Three ideas later, we’re tabled at the Agave Kitchen and I’m eating a cheeseburger bedecked with pulled pork and coleslaw.

It would be corny to say a divine master plan got us here, but it’ll take about that much to keep me from coming back.

The Basics: I’m elated to announce the Agave Kitchen gutted an rebuilt their website! It’s more useful and easy to navigate. I could do without the news links at the bottom of the front page, but this upgrade overall was like chasing a High Life with a swallow of Pappy. Here now is the hyperlink to the Agave Kitchen website!

They’ve been in operation on Hudson’s main drag since 2008 and recently finished second in the city’s burger competition.

The Agave Kitchen, with its campy sign postings and a bull logo that looks like Twin Shadow’s people designed it, is at home just off the St. Croix River but could fit in with its peers in Minneapolis. The up-bar is technically called the Bullpen Cantina, but it’s rarely referred to as such in everyday conversation. The Kitchen dodges many of its competitors, who drop their burger prices to $5 on Mondays, by hanging their $5.99 special on Tuesdays. We, however, were blessing my car on a Wednesday.

“Well,” I said to Father after he finished sprinkling the interior, “care to go for a quick spin?” As soon as the car’s in drive, my wife chirped from the back seat: “Want to go for a beer quick?” Father suggested the Avage Kitchen. Just like that, we were pondering apps in the Bullpen Cantina. Then, we were pondering cheeseburgers.

Featured in Agave’s menu are a gang of cheeseburgers dubbed the “Signature 27.” My wife and Father had their choices locked in quickly, but I waffled and waffled and finally asked the waitress, “If all 27 of these were dangling from a cliff, and you could only save one, which would it be?” 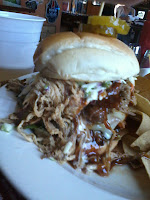 She’d save the Italian Stallion, a cheeseburger that is no longer listed on their menu. She was an awesome waitress; but, after this development, I hope I never need to be rescued by her.

“Other than that one,” I said.

She pointed me to the Steeburger – seasoned beef with pulled pork on top of the beef and coleslaw on top of the pulled pork. PULLED PORK ON TOP, YOU SAY?! YES, GIVE ME THE ONE WITH THE MEAT AND THE MEAT!

The only free side option at Agave is a handful of chips. Some people are into chips, but I’m not. Agave’s tap choices are adequate, and any beer served on either floor (they do differ) can be accessed anywhere.

So what did we talk to our priest about while the food was being prepared? The Brewers, mostly. I talked about how my Angels … to put it gently, lose a lot … and how my wife and I have no idea how good the St. Paul Saints are because we’re usually too drunk to follow a baseball game by the time innings begin to matter (Father doesn’t judge).

The food arrived in respectable time, and I faced down the Steeburger. This wasn’t a wimpy little topping of pulled pork; this was a pulled pork sandwich hooking up with a cheeseburger under my top bun. Mixed in with any other combination, the coleslaw would have looked like an accident. On this burger, it looked unconventionally chic. Barbecue sauce dribbled down the pile of pork from atop the slaw.

And the taste. WOW! Once I unhinged my jaw far enough to close around this monster, I took in something truly special. Every bite began with sucking in a body shot of grease, pork juice, and slaw sauce … so not only was I enjoying a superb burger, I was enjoying it twice per bite! That joke I always make about how a restaurant should sell a food item’s flavor as a breath spray, it was happening right before my eyes mouth! The bun had two difficult jobs – hold all of this together and stay off my fingertips – and delivered on both.

To-go box? HAH! The Steeburger is not for the small-stomached or curious vegans; you’ll find yourself with ill-fitting tube tops and judgmental hippie friends if you dare approach this with “cut it in half” aspirations.

That whale of a burger? You’re eating it all. That pile of pork it leaves behind on your plate? You’re eating all of that, too. My wife had the triple cheddar and bacon cheeseburger, and how do you think she liked THAT!? Father had already been speaking the gospel of Agave, but his steak burger produced one of the most giddy food points taken to date.

And to think, the general populous of Hudson voted one restaurant’s offering better than this. This means one of two things: Either the Village Inn has Lisa from “Weird Science” working its grill, or Hudson has its own version of Matt’s Bar Syndrome. “All the old people say this place is the best, so I think it’s the best too!” I looked at the Village Inn’s menu and I don’t understand how any of those could stand up to a Steeburger.

Everything about our dinner at the Agave Kitchen was extraordinary. Our server (I wish I could remember her name) was so friendly and prompt with her service, she might as well have been sitting at our table eating with us. Even if you don’t get in on a Tuesday, $12 for a Steeburger … it’s such a good deal, they might as well call it a Stealburger (ZING!). And for what? The best cheeseburger I haven’t been eating regularly for the past 3-12 years.

Get in there on a Wednesday, stroll in there on a Friday, cram your keester in there on a Tuesday, or stain up your Sunday best after Mass. Whatever day, a plastic cup of beer and a Steeburger is as close as you can get to Heaven on Hudson’s Second Street jam. Amen.