“What was the last thing I did before flying back to San Diego? I sat in a wooden booth under a giant portrait of a cow at a restaurant whose logo looks like a uterus.” 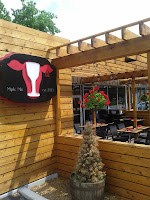 I’m quoting myself pretending to quote our pal Rudolph, who met us for lunch before her flight back home a couple of Saturdays ago. We swung off I-35 and pitted at Red Cow, the new hotness in a Twin Cities teeming with buzzworthy kitchens. The restaurant looks like a wooden trunk on the outside, but trust me – these guys are thinking outside the box.

All three of us left Red Cow raving about something, though none of us raved about our cheeseburgers in particular. Sometimes, it isn’t the restaurant’s fault. Sometimes, you can tell the food is good and you leave second-guessing your own decision.

The Basics: I hate Red Cow’s website for the most irrational of reasons. As sick as I am of hearing the word “innovation” at my office, I’m 10 times as sick of hearing food items referred to as “gourmet” … and I’m 10 times as sick of that as I am of hearing the word “craft.” Red Cow shoves the G-word into your face on first contact, and uses the word “craft” TWICE in the same sentence. Not very crafty, if you ask me. Otherwise, the design is simple yet puissant and the photos are provocative. 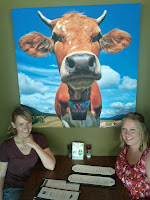 Red Cow opened this year and is nested between Lake Harriet and the cash-pumping heart of Edina, on 50th and France if you want to be specific.

Red Cow had probably been open a half-hour when we pulled up in front of their patio seating and parked. Rudolph took one look at their logo and said, “It looks like a uterus.” My wife concurred. I’m no anatomy major, but I looked it up after the fact … and yeah, it kind of does look like a uterus. ANYWAY …

The barnyard theme is stylishly infused throughout this ghost of a Blockbuster location. From the spotted panels on the bar front to the portrait of THE red cow hanging in our booth and wood-planked walls throughout, the designers did a good job presenting an atmosphere you’d want to set foot in at night whilst reminding you that it IS called Red Cow. The bar half is much louder than the restaurant half; aside from our portrait and the bright red booths popping out against the far wall, there isn’t much in the diner half to distract you.

If you’re like us, the bacon puffcorn will arouse (huh-huh, I said arouse) your curiosity and you’ll lay the $3.50 to try it. It’s exactly what it sounds like – caramel corn like the contents of Christmas tins, except with bacon bits clinging to them – which made it all the more confusing. It was sweet, but it was salty, but I’m not usually into caramel corn, but the B-word. The admixture of BACON into a food item shouldn’t surprise anybody these days, but the flavor of this little appetizer was … hard to stay away from, that’s for sure. 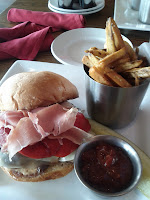 All the while, our vaguely Chris Pine-looking server kept checking back to see if we were ready. On his third attempt, we flew. Rudolph ordered the lamb burger, with the mint jelly and cream cheese on the side. The server backed her decision, admitting the mint jelly can be “kind of shocking.”

For my wife, the bison burger; for Mr. On-a-Prosciutto-Kick over here, the Barcelona (Editor’s Note: The first time I tried to spell Prosciutto, spell-check prompted me to “Prostitution”). While the food was being prepared, we continued to chow on the puffcorn and make juvenile humor over the most innocent of language.

Once the food arrived, things got no less confusing.

Though I enjoyed the Barcelona, the kickless pepper and aioli held back my enthusiasm. I chided myself briefly for diving into a mellow cheese like manchego even after the server cautioned me of it. “Mellow” is almost the opposite of how I like cheese, but I really wanted that prostitution. It proved that Red Cow is slinging good product … but I wished it was spicier, or that I had ordered something that didn’t sound spicy.

The ladies loved the French fries and triple-berry ketchup, but my wife got two bites into her Bison and left it alone. It was partly owing to overkill on the fries and puffcorn, but partly because the figs just didn’t appeal to her and she didn’t like goat cheese the way she remembered. My wife wants to come back this way, to order something WITH traditional uterus cheese and without figs. 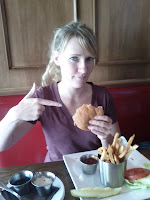 Rudolph gave a short presentation on the quality of the bun that could have thrown her right onto your television as its spokesperson, but the mint jelly didn’t pass the smell test and the cream cheese was barely touched. On the way to the airport, she talked about how the beef lamb was great but “I just didn’t like all the crap that was in it.”

Servers didn’t have the “It’s not my table” attitude here. Their staff worked as a team and took care of us very well. All of the burgers come with a price tag between $10 and $12, with one $15 exception, and just under $50 took care of everything. All in all, Rudolph couldn’t have done much better as a last meal before touching back down in SoCal.

So that’s Red Cow: A restaurant whose logo might make you giggle and whose design kit looks stolen from a dairy company, whose risky flavor combos might foster regrets but whose dining experience as a whole is a booty worth digging for. A verdict of “It tasted good, buuut” could go one of two ways, but when your servers are clearing the hurdles cleanly, your appetizer is a low-cost bowl of fun, and you’re making us talk about your ketchup … in Minneapolis’ concrete jungle of new and trendy kitchens, I think Red Cow is going to be just fine.