It goes bun, then beef, then Swiss, then bacon, then beef, then American, then onion, then egg, then ham, then lettuce, then tomato, then bun. Plunge a steak knife through the middle of its hat and you’ve got yourself a Good Ol’ Burger.

It’s almost a foot high, three apples easily, and resides in the only town with a name worthy of its residence: Tower. 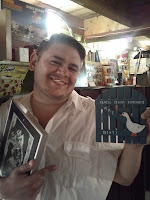 Ladies and gentlemen, we give you Good Ol’ Days. If you don’t think it’s worth a 45-minute drive from Hibbing, you’re thinking too small.

The Basics: You don’t seriously expect a Tower-based restaurant to have a website, do you? Well SURPRISE, they do! It hurts to look at, but they’ve got one! Good Ol’ Days sits kitty-corner from Rick’s Relics on the town’s one significant street. It makes for a perfect day of heavy lifting and light thrifting. Back door friends are best.

ELIOT: Put every Rat Pack, Marilyn Monroe, James Dean, Paul Newman, and Elvis movie into a blender, brush that paste liberally onto the walls, then run a toy train track through the rafters, and you’ll have a good representation of Good Ol’ Days.

ME: We were greeted by a giant, glass-encased Hamm’s bear; a life-sized Elvis doll, complete with pompadour and guitar; and a rotting clown head, open-mouthed, big enough for you to reach in and pull out a nightmare.

The men’s room is also loaded with art, but it’s a … different art. I’m talking “sneak into the back of the video store” type of art. 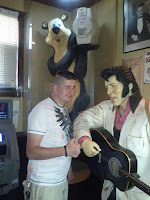 Like many Iron Range establishments, pool tables are plentiful and you can play on the cheap — which is nice because, the way I shoot, watching myself play and playing $3 per game is a pricey torture, indeed.

ELIOT: One can describe the dimensions and materials, but that doesn’t prepare you for the first time you grip the knife handle. Knives? It’s strictly for structural support, plunged straight down its heart and waiting for the next King of England to pull it out. 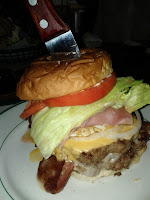 I escaped mostly unscathed, but not without a handful of trips to the bathroom to gawk at the poster above the urinal wash my hands.
The lettuce and tomatoes were crisp, the ham and bacon were thick, and the patties were cooked right. It wasn’t the type of pop-cuisine flavor puzzle you pay $15 for in the Twin Cities, but it didn’t need to be. The Good Ol’ Burger did its job, which was look menacing and add a few pounds to my torso right when I was about to go swimming.

Oh, did I mention this cheeseburger was NINE FRICKIN’ FIFTY!? Put five pounds of fries next to this and this would get a Twin Cities restaurant on Man Vs. Food. It would also be like $40. I know I’m not comparing apples to apples, here, but the disparity is hard to just overlook.

This little town’s main street is filled with small things – nine-man football team co-oped with another community, one of the last small-town groceries in Ameri-Mart, and a business district you could cartwheel down without stopping – but Good Ol’ Days, with its little corner and its little space, has the embodiment of Tower coming out of its kitchen.

Even if you can’t eat it, just go up there and hold it one time. Just holding it will be worth the trip.