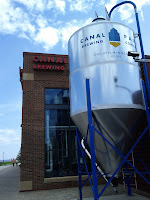 I could only count on one hand the number of seats I’ve sat in and thought to myself, “I could spend the rest of the day right here.” It would have to be relatively quiet, it would have to be outdoors, and I would have to have at least one breathtaking view. My rock on Lake Superior, a seat at Masseur’s poolside table, my tailgate tent at Midway Stadium, and the shaded picnic tables at Carver Park in Woodbury come to mind immediately.

At every one of those places, you have to grab your own drinks. Bummer. BUT, what if somebody offered you a nearly unfettered view of your favorite piece of nature, that you could enjoy while somebody brings you a powerful brew and a cool sandwich? How long would it take you to jump on that? Two, three seconds? Faster than somebody could count to one?

For me, it exists now. It’s like my little pint-sized Heaven: The Canal Park Brewing Company. 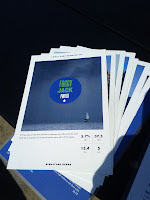 The Basics: The CBP opened in 2012 and is the most visible representation of a craft brew scene creeping north from the Twin Cities. It sits all shiny and new among Canal Park’s infrastructure. The website’s front page makes me want to just run outside, and the “About Us” is worth a quick scroll-over at least. On that page, you will also find tour information if you’re into that.

My first visit to the CPB was a brief one: I asked for meter change and walked out.

My second visit to the CPB was a dangerous one: Had I not been on such a tight schedule, I would have closed the place down.

I don’t know what the inside looks like because, with the view this patio has, you’d be an imbecile to stay inside. This brewery knows what it’s rockin’, too, as the tables closest to the lake are low enough to present zero interference with your view. You almost have to put your head between your knees to reach your food if you order some, but you won’t mind. Also on the patio is a self-serve water fountain. Everybody – EVERYBODY – needs to have this. 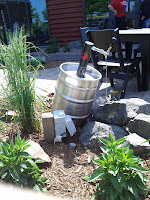 This isn’t like that quacky patio at Fitgers that’s 50 feet above the lake. That’s an impersonal, snobbish way to enjoy Lake Superior. To properly view the lake, you have to be level with it. The CPB gives you the best view of this sort you can get without having to haul your own picnic.

Coming solo allowed me to relax; and, like many Duluth establishments, the friendly wait staff was a built-in dining partner. My waitress, in particular, was nearly flawless in her timing and delivery. I remember her braided pigtails and earth-tone conductor cap, but I don’t remember her name.

Upon first contact, The Conductor covered my table with a collection of cereal-box-poster-sized cards meant to help you select a beer. I love this accent. It conveys confidence in what you’re producing. Knowing it was the wrong day and temperature for it, I went porter anyway and ordered the Foggy Jack. Make no mistake: I could have had probably 12 more of those, but I looked for something proper…er when The Conductor returned. 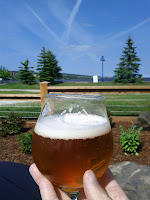 “Okay,” I said, “If all of these beers are hanging from the edge of a cliff, and you can only save one, which one are you saving? Except for the pale ales.”

“Well …” she said with a “my answer was going to be the pale ales”-type hesitation. Servers always recommends the pale ale first. I don’t understand. “I’d probably do the tripel … but can I give you a back-up option?”

The Conductor emerged a few minutes later with a fancy glass of Dawn Treader. It was, for lack of a real word, Nirvanic. It’s sweet, it’s cool, it’s 10% alcohol – this beer is vacation. And look at that fancy glass! That’s right – you don’t drink supermarket suds on vacation, you drink a summery judgement-smasher out of a fancy glass!

I was about to write “Their menu isn’t too intense because they’re a brewery first,” but their menu is fairly deep. Blame my “Gouda-vision:” I see Gouda cheese on something and the other options disappear. The day someone makes Gouda cheese baking soda box is the day I die. On this day, my Gouda fix came on the Canal Park Club. 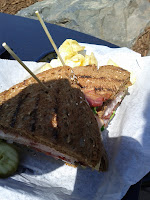 The wait for your food? Who cares! Look, there’s Lake Superior! The food couldn’t taken four hours and I wouldn’t have complained. In fact, I almost wish it would have.

The Canal Park Club is an idiotproof sandwich – crisp, cool, with nothing weird inside. I took a moment to study it so I could recreate it at home later on (sorry). Have one of these and you’ll never pack cheap ham-and-cheeses in your pick-a-nick baskets again.

You see the bacon on that, right? Okay, just checking.

When the worst thing you can say about the food is “I asked them not to give me the side chips and they did anyway,” the kitchen’s doing quite well (everyone does that, by the way). The bill crept just over $20, which might seem kind of Metro for a sandwich and two crafts but I’m used to that price point. The saturation of the craft beer market is making “the good ones” harder and harder to find. Let me be the first or second to tell you CPB is on the right side of the man law.

There are certain elements of the Twin Cities that are better left in the Twin Cities, but I’m more than okay with a craft brewery right on the North Shore. If bicycle lanes start getting painted onto the roads and Proctor starts getting called “Uptown,” that’s where I would draw the line. This, though, I love this. That day, it became one of my getaway spots. I don’t know if I’ll ever want to bring a large party here, but I won’t have a second thought about coming here alone – even if it meant coming straight from Woodbury.

In fact, Canal Park Brewing Co., if you ever read this, can we set up a PayPal? Can I just make monthly payments and you put that toward future tabs, like car insurance? Can we get this set up tomorrow? I’m serious here. If I was able to just drive up to Duluth and spend a day on your patio knowing my tab was prepaid — hold on, I just went braindead for a second.