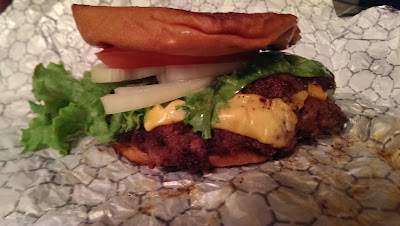 Want to be a ghost for Halloween without buying a costume or make-up? Eat : D-Spot cheeseburgers ’till your blood pipes burst. Three a day should have you in the graveyard by Halloween – but the road to Heaven has never been tastier.

The Basics: If I was St. Paul, Maplewood, and Oakdale, I’d be fighting to claim this place too. It could be any one of the three, depending on who you ask – Urbanspoon says Oakdale, but the Spot themselves say Maplewood. It’s easy to miss in that little run-down strip mall on Century and Minnehaha. Just look for it in the McShadow. See them on the Internet right here – click the menu link and get screen-kicked by their wing selection.

If you scroll down, waaay down, you’ll notice two varities with skulls on their nametags. Those are so intense, you have to prove yourself worthy by surviving other hot wings.

That rap music you’re hearing out in the parking lot isn’t coming out of a bouncy Impala, or from that Vietnamese restaurant next door with the busted headlight. It’s definitely coming from D-Spot.

The Spot’s interior is tiny and tame by restaurant standards. Not counting handprint stains, the only wall decor is this acid-trip mural (it extends further down, but the table there was occupied). Otherwise, you’ve got gray walls and black tables. Done. With only soda cans and juice boxes to quench your thirst, however, I’ve got to think D-Spot makes most of their hay on pick-up and delivery orders. Of course, I’m basing that only on a couple who lives five minutes away.

Thus far, we’ve gotten the same thing every time: The bun-verted masterpiece, the 50/50, with cheese and the “Cali set” (lettuce, tomatoes, and onions). This bacon-infused burger eats like a slasher flick scene. Drips of tomato aioli patter your plate and stream down your arm. The thud of an onion chunk or splat of tomato glob occasionally call your eyes downward, but then it’s back up to assess bun positioning. That’s key for eating a 50/50.

The vegetables on this goblin are among the freshest and crispest I’ve tasted on beef. I’m normally not a flat patty-backer, but D-Spot’s ghetto-fab feel would make a plush patty seem alien. Also, the patties and cheese slices haven’t once resembled a neat stack – which I’d like to think is by design. In fact, I hope they’re just flipping everything into the air with a spatula, catching it on the bottom bun, and packaging it however it lands. The toppings and beef are so the-good-nasty, I’ll take it however they stack it.

A double cheeseburger with the Cali set runs you around $8, six for a single. Having never eaten in, I can only speak to service as far as the cashiers have always been polite. What I can say, though, is this metropolitan jungle boasts a bevy of highfalutin eateries trying much harder and achieving much less with their cheeseburgers. It’s frightening to think the 50/50 isn’t even what gets the press in here.

Don’t worry, though. The wings and I are on a collision course. When I start burning my way up that ladder, you’ll be the first to know. You might have to read about it on the obituary page, but you’ll hear about it just the same.